skip to main | skip to sidebar
We welcome comments: please click the link at the bottom of each post to add yours.

Public relations professionals have higher morals than surgeons, businessmen and accountants, claims a study (and its press release). 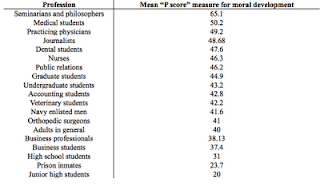 A study suggests what many journalists have doubted for years – that public relations (PR) professionals have an effective moral compass.

The study looked at 118 PR professionals, working for PR firms whose clients include the likes of Exxon–Mobil, GlaxoSmithKline and Reebok. Using a series of questions from a survey called the Defining Issues Test (DIT), they posed six ethical dilemmas to each subject.

Another scenario asked whether they would confirm or deny leaked information about a school closing. This time 31 percent were in favour of confirming the story, 32 percent said they would deny it, and 37 percent couldn’t decide.

Tallying the responses from each scenario, the researchers calculated an average 'moral development score', which they then ranked against other groups of professionals tested in other studies using the DIT. The PRs ranked seventh out of all groups assessed in the hundreds of previously administered DIT studies (see table below).

The researchers say the study is “the first to empirically measure the moral development of working public relations professionals”.

And it certainly had the audience and backing – the study was published in the July issue of the Journal of Public Relations Research ("examining our understanding of why organizations practice public relations as they do and by studying ways to conduct public relations more effectively," according to the journal's website).

Furthermore, it was funded by a $10,000 grant from the Arthur W. Page Center for Integrity in Public Communication – a research centre dedicated to the study and advancement of ethics and responsibility in corporate communication and other forms of public communication. Proof positive that there is a journal – and grant – out there for almost anyone.

Andy Extance is a freelance science journalist.
Posted by Mun-Keat Looi at 05:10